In my ‘Document Storage Solution’ post, you must have noticed the huge clock on the wall unit. Did that make you wonder why and how that is there? I made that clock because you see, there is no other place in our master bedroom to put a wall clock. 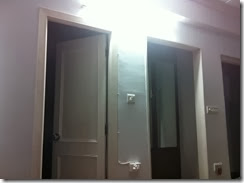 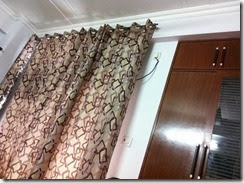 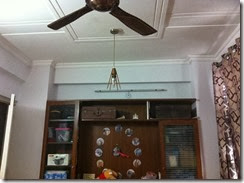 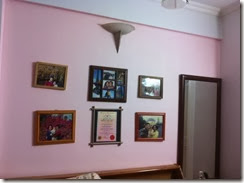 All the walls either have door or some opening, I could have hung a wall clock on the back wall of bed, but then that would have defeated the purpose. When I am sitting on bed, I should be able to know the time, tossing and turning just to take a look at the clock is just not me. And moreover, the wall unit was empty. We have no plans of putting TV in bedroom, so this place was basically shouting to get a makeover. I have seen some very expensive clocks photo clocks in Archies and Hallmark and online too, like this -

I definitely did not want to spend so much of money and still not be satisfied with the dimensions. Plus, I thought and was sure that I can make it myself for a much cheaper price. And, so I came up with this Photo Wall Clock. Making this is really so simple, that I was actually hesitating to put it in the DIY category

Following are the items needed for making this clock:

1) 13 CDs – Yep, the round pictures are set on a CD. I used the CDs lying on hand, used, unused doesn’t really matter. I chose the ones of movies, which we don’t watch and had bought just on a whim.

2) Clock Machine – I got it from a watch shop and chose the sweep machine which was expensive than the tick tick machine, but that is what I wanted.

3) 13 Pictures – I printed the pictures on a simple white copy paper (not the photo paper, because I wanted to stick it on a CD).

4) My initial thought was to have pictures of our son and daughter on the two clock hands. So, I made two cardboard hands and pasted their pictures, but the actual clock hands did not bear its weight and the hands kept falling down. So I just pasted red cardstock paper on the clock hands.

The procedure is really very simple. I printed the pictures on my home printer on a simple copy paper. The size I chose was 5” x 7”. I wrapped the picture on to a CD like this: 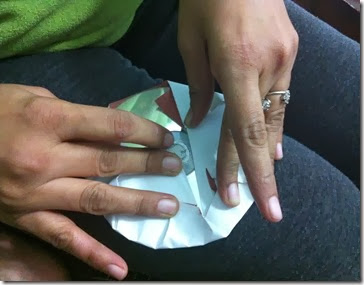 It looks fine this way, but to give it a clean and laminated look, I covered it with a cling wrap. I did this for the 12 CDs for 1-12 on clock. For the middle, I stuck the machine on the CD and attached the two hands on it. I chose the picture in which we are a bit on the lower front so as to make way for the hands. I positioned the picture on the CD and made a cut along the radius so as to slide it across the machine on CD. I did not cover it with cling wrap. I measured the area on the unit, and chose the center point. But for putting the 1-12 numbers, I just eyeballed the positions, and placed the CDs with washi tape (temporary). Once I placed all the CDs, and was sure that the positions are alright, I used double sided tape for the numbered CDs for sticking. For the middle CD, since the machine was heavy, I needed to stick it real hard so that it could hold the weight. 3Ms picture hanging strips came to the rescue. This clock has been holding good for more than a month now. Functioning well and serving the purpose well.

And it sure is a pretty sight while sitting on the bed. One more good thing about it is, I have placed the pictures in chronological order and it sure reminds us of the beautiful times spent together at different places.

Overall, this clock cost me about Rs. 220 which is for the branded clock machine (Ajanta) that I bought. If you go for a local make, it will cost you anywhere from Rs. 100-150. and a tick tick clock machine will cost you even less. No matter what, this clock sure is a great deal for me as this is exactly what I wanted at a sure low cost.

What do you say? Do you like my Photo Wall Clock? Have you ever made any clock? Please do share your experiences…

Hi, I am Sims. With IT as profession and simple DIY as passion, I plan to share my experiments with home through this blog. So, Come join me in this journey to get organized and do some simple DIYs to make life better!!